For many years, as a Lubbock electricity consumer, you have had no choice in who your electricity provider was. Your bill was your bill and the rate you paid per kWh was decided for you, no questions asked. However, the future holds something entirely different.

Lubbock will soon be a part of the deregulated energy market, like the majority of Texas is. What does this mean? Many things, actually. More electricity companies and lower bills (if you know what you’re doing) are just a couple.

Read on to learn about electricity deregulation as a whole and how it applies to Lubbock, Texas. Make sure you understand what’s about to happen so you can have the lowest Lubbock electricity bill possible.

What is Energy Deregulation?

Before we discuss what is currently happening in Lubbock, let’s cover the basics of the Texas electricity market and electricity choice. What does energy or electricity deregulation mean? To put it simply, a deregulated energy market allows customers to choose their own electricity provider and energy plans.

Before 2002, all of Texas was regulated, but now, more than 80% of Texans have the power to choose their electricity service in a deregulated market.

A regulated energy market gives the customer no control. Instead, the electricity provider is chosen by the local government. Since citizens in those areas don’t have a choice over the rate they pay, there is no electric competition among retail electric providers (REP).

What do we mean by competition? Well, competition is the most important aspect of energy deregulation. As with most markets,  prices will decrease if different companies are pushing to gain customers. This leads to lower electricity bills. Though deregulation benefits the customer in theory, around 20% of Texas is still regulated. Lubbock is one of those cities, but not for much longer. 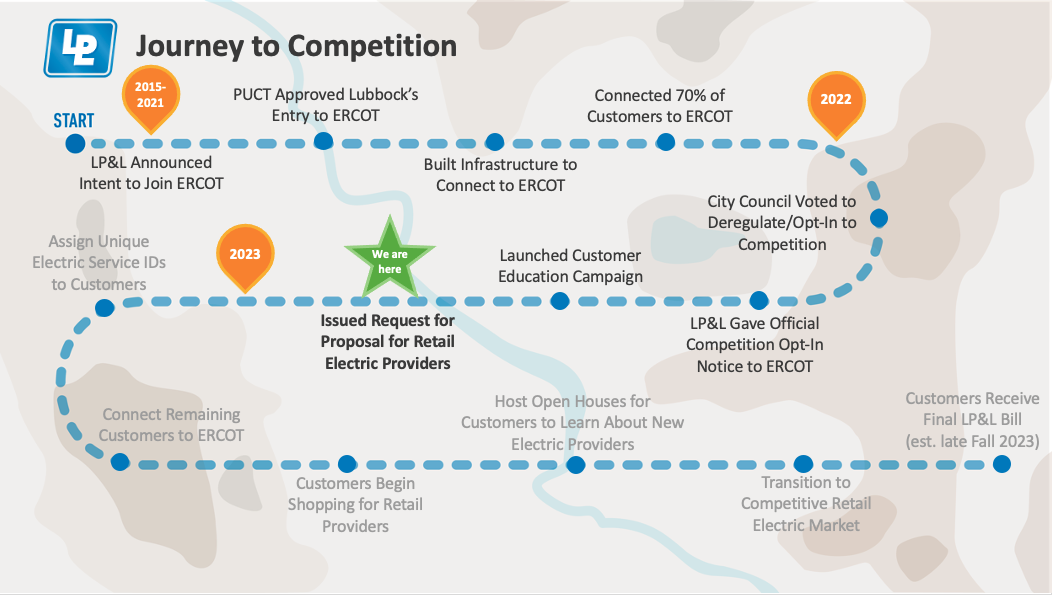 Prior to May 2021, the city of Lubbock was connected to the Southwest Power Pool (SPP) electric grid. The SPP is a grid that generates electricity for midwestern states like Kansas, Nebraska, the Dakotas, and a small portion of Texas. Lubbock Power &

Light (LP&L) has been the main provider of electricity for the city of Lubbock by distributing electricity from the SPP.

Why Is Lubbock Becoming Deregulated Now?

Due to contract terms with the SPP, Lubbock was going to be required to build a new power plant for energy generation. This new build would cost at least a few hundred million dollars if not more to complete. This project would also cause Lubbock electricity prices to rise for a few decades to recuperate the cost of building the power plant.

Besides building the new power plant, Lubbock City Council had one other option – deregulation. To join the giant group of deregulated cities in Texas, all Lubbock had to do was transition to the ERCOT grid.

How and When Will Lubbock Deregulate?

The Electric Reliability Council of Texas (ERCOT) is an organization that controls the Texas power grid. That grid powers 90% of the state. In 2021, 70% of Lubbock transitioned to ERCOT. In order to do this, many miles of new transmission lines were built and smart meters were installed to replace old manual meters.

Once the final 30% of Lubbock citizens are transferred over, deregulation will officially start. The power to choose your electricity plan in Lubbock is anticipated to be Fall 2023.

Energy Ogre Saves You Money on Your Lubbock Energy Bill

If you’ve been living in Lubbock for a while, you’re likely not used to worrying about what’s the best type of electricity plan or what is a kilowatt hour? The rate you got from Lubbock Power & Light was the rate you paid. Now, with a more competitive market, you’ll be faced with deciding who your energy provider is.

How Do Energy Brokers in Texas Help You Shop for Electricity?

How to Choose Between Types of Electricity Plans in Texas

Pete and Paige: Busy Parents Save BIG with Energy Ogre