It's Not Free If You're Paying for It

Everyone, including Texas electricity shoppers, loves free stuff. However, nothing in life is free. Consequently, electricity plans that offer "free" nights and weekends, highest usage seven days are free, event tickets, or maybe a flashy, household gadget, are not what they appear to be. In this post, we'll explain how these types of gimmicky plans? we like to call them expensive freebies -- are misleading and expensive.

Nearly 20 years ago, Texans did not have the opportunity to shop for power because the electricity industry was regulated. In January 2002, the State of Texas decided to deregulate the market, allowing consumers to shop for power in a marketplace of various retail electricity providers (REP).

This change broke up electricity monopolies across the state and has lowered electricity prices in the newly deregulated areas for people who've sought them. Though, the new access to low prices was challenging for some because all of a sudden, millions of people had to shop for the commodity for the first time.

What is an Electricity Plan? How Do I Shop for It?

We may be biased, but the electricity-buying process is not incredibly complicated. To purchase electricity, consumers must shop in the market to purchase one of the thousands of available plans. This can be done by finding a plan online or by calling a provider directly and inquiring about their offers. Seems simple right?

For the average consumer, shopping for a plan is time-consuming and confusing. Some consumers spend hours looking for their next plan. Others choose the first plan they see. Unfortunately for both groups, chances are they will overpay for electricity.

Price is important when people shop for anything, whether it's groceries, gasoline, or a new computer. Electricity shopping should be no different. But do people typically purchase the cheapest or the best plans available? Typically, we find the answer is no.

Why Do People Overpay?

On average, we find that most Texans overpay for electricity each month. Here are some of our theories as to why:

The electricity space is technical; it's full of technical processes and confusing acronyms. However, there are two scenarios we use to explain the electricity marketplace. Each of the scenarios involves a cold, refreshing water bottle. 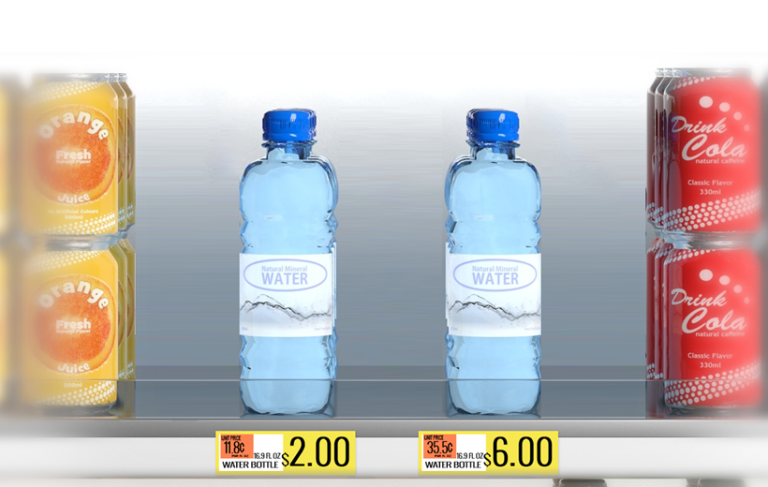 Imagine one store has a monopoly on bottled water -- no other store can sell it.

Without competition, they can gouge prices, knowing people are going to pay whatever it costs for the coveted water.

Consequently, the price of your bottle of Dasani triples from $2 to $6.

Next, imagine driving to the store after an intense workout or hot summer day. All you want is a respite from the scorching summer heat or an intense, full-body workout.

As you approach the aisle, you notice an expensive, beautiful water bottle sitting atop the shelf. This chilled vessel of refreshment sits atop the cheaper competitors that do not possess the same status. Undoubtedly, the most expensive water will quench your thirst. But for the most part, it'll have the same effect as a cheaper bottle.

Sure, you can pay a lot more for the expensive water if you want, but you're still buying H2O. Most people will purchase the cheaper option, knowing they are saving money.

Shopping for Electricity is Similar to the Water Bottle Comparison

Additionally, we've established price is important -- you can spend more for the same type of product or service...but why would you want to if the quality or results are the same?

It seems silly to me as if you're wasting money on purpose.

You may be wondering, "how do these scenarios apply to my electricity plan?"

The two scenarios relate to everyday Texans who shop for power without understanding the market or the way it operates.

Here is one big takeaway -- by shopping for the best plan at renewal time, you will experience competitive pricing and save money each month. However, becoming an Energy Ogre member is the best way to gain access to below-market rates that offer custom prices exclusively to our members.

Free Nights and Weekends Plans (Among Other Gimmicks) Aren't Free

As we mentioned earlier, we call these gimmicky plans what they really are -- expensive freebies.

Historically, providers have employed a number of tactics to attract more customers.

Whether it's a too-good-to-be-true price or a quirky plan that offers "free" stuff, REPs do whatever it takes to make more money. Just like cable or cell phone plans, loyal customers can easily fall into the trap of overpaying.

Like when REPs raise customer rates with each new contract.

According to a Dallas Morning News report, she stated REPs "always find a way" around the PUC's best efforts to keep the marketplace honest and transparent.

"Whatever practice we put in place to try and end the confusion, then they find a way around that," she says.

To illustrate how misleading these gimmicky plans are, we've compared a highly advertised rate from a large retail electricity provider in the Houston area to a low fixed rate that we enrolled many members into (plans and corresponding figures were available as of 1/12/2020).

Let's dig into the comparison.

Of their usage, 1,218 kWh were used during the daytime.

With the first plan, the homeowner's nighttime usage was "free," and as a result, they were charged for "only" 1,218 kWh.

In the second plan, the homeowner was charged for all 2,100 kWh they used because they did not have access to free nights (or the nifty Google Nest Hub).

Given the figures listed in each electricity facts label, without factoring in taxes, here is what the homeowner would pay if enrolled in either plan.

In the gimmicky plan, the REP bases the plan's average price per kWh on 42% percent of power being used at night throughout the year-long contract. 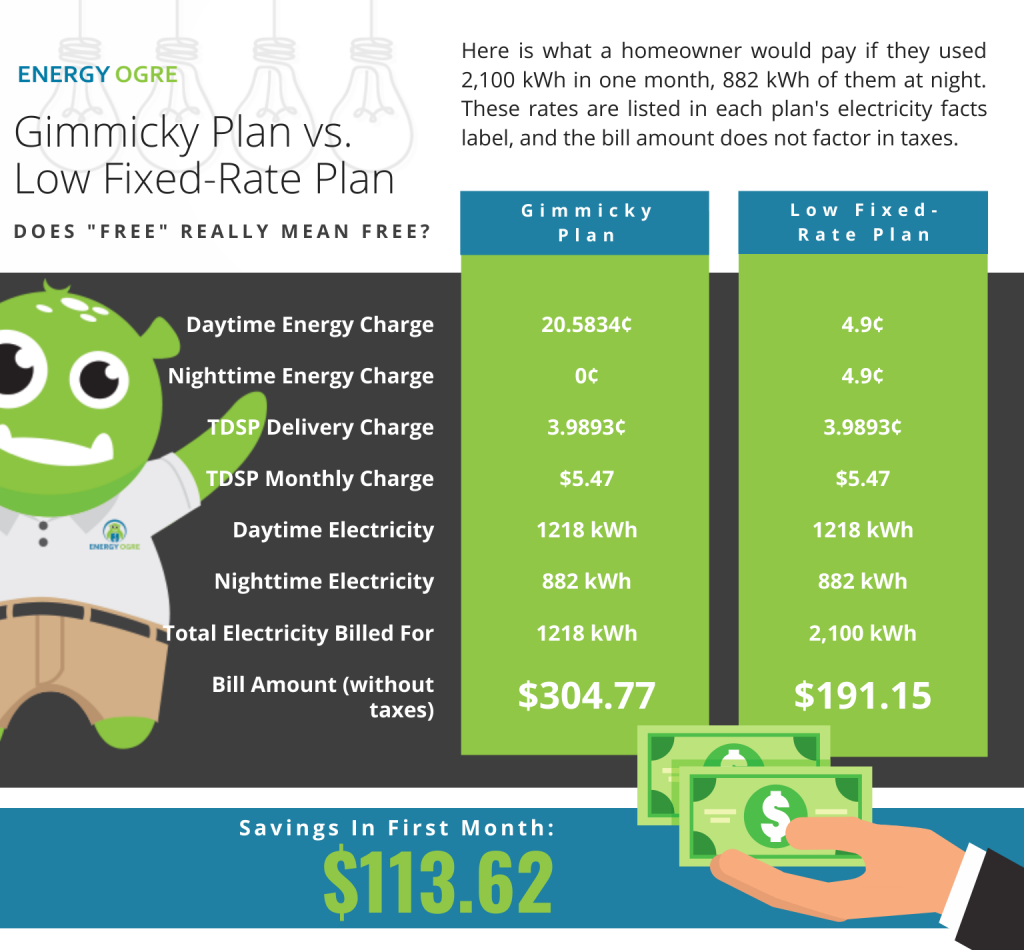 Even if math is not your specialty, it's easy to determine the price difference in these plans. Speaking of math, let's do one last calculation.

In the gimmicky plan's ad, the REP reported customers would be given a Google Nest Hub, which they claim cost $129. Customers who enrolled in the first plan would not only get "free" electricity while at night, but they would also receive the new Google gadget.

But when you do the math, customers who enroll in a cheaper market rate save so much money in the first month alone to nearly buy the gadget for themself.

Now, consider the savings customers can experience over a 12-month contract when they forego and ignore the gimmicky plan.

Assuming their usage remains comparable to the 2,100 kWh we used in the example, they'll continue to save more than $100 per month.

With that said, do you still consider highly advertised and incentivized plans to be a good idea? Good, we don't either.

The Reality of Free Nights and Other Gimmicky Plans

All of these types of plans are structured in a way that seems appealing, but can actually cost consumers more than traditional, fixed-rate plans.

In many gimmick plans, you'll receive some type of free electricity for a certain period and a nice gift. But you will pay double, if not triple, in other hours of the day to make up for money lost during the "free" nights or "free" weekends."

The plan we used in this comparison is no exception.

Plans that tout an incentive, whether it's free solar days, 7 days free, or in this case, free nights, are typically misleading, overpriced, and exploitative. Customers who enroll in these plans are paying, as we've demonstrated, considerably more than they would if enrolled in a better plan.

Often, even if a homeowner shifts a large percentage of usage to nighttime, they are still paying double, if not triple the price until 8 p.m.

I commend those willing to wash clothes and run their dishwasher all night to take advantage of their gimmicky plan. However, that lifestyle is difficult to sustain, and frankly, it's preventable by selecting a low fixed-rate plan.

In conclusion, are you interested in finding the best electricity plan for you?

Do you want to delegate this responsibility to an expert with years of experience?

If so, please visit Energy Ogre's website, or call us directly at (832) 975-1000 so we can enroll you in an appropriate contract (and all future contracts) that'll save you money each month.